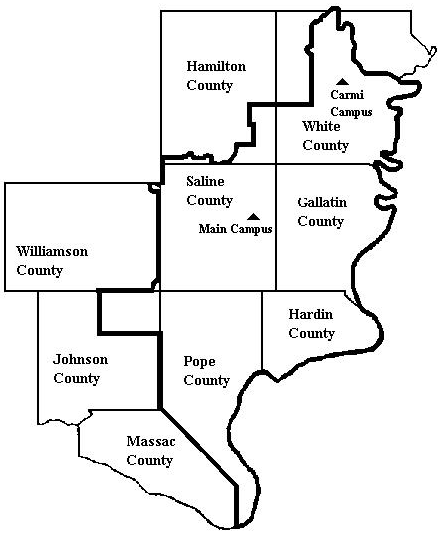 The geographical area which comprises District #533, Southeastern Illinois College, is one of the most beautiful, unique areas in the State of Illinois and is certainly one of the most historical in the early settlement of the state.

The eastern boundary of the college district is the Wabash River which separates Illinois from neighboring Indiana. The river, still not very large here, winds its way towards the Ohio River providing excellent fishing and boating for recreation and irrigation for farmland. It empties into the Ohio River just below the Union Town Lock and Dam which is the beginning of what is known as the Smithland Pool on the Ohio River. This unique pool, the longest on the Ohio River, extends for more than 90 miles across the southern edge of the district to the Smithland Lock and Dam which is located in Pope County.

Old Shawneetown, Battery Rock, Cave-In-Rock, Elizabethtown, Tower Rock, Rosiclare, and Golconda are just a few of the must-see places on the river. The river is so large and deep on this pool that fishermen, pleasure boaters, and tow boats can use the river together and not get in the way of one another.

From the Ohio River, the southern part of the district rises up into the wonderful hills of the Shawnee National Forest. Hiking, hunting, and horseback riding are just a few of the pleasures of the Shawnee National Forest. On a winter's trek through this area one could see thousands of geese, a herd of deer numbering more than 20 (or perhaps just a couple here and there), a group of large, strange-looking birds, maybe 9 to 12 of them, which turn out to be a wild turkey, minding their own business, but certainly minding business as they feed.

Towards the northern edge of the district, the hills fall off into some of the best farmland in the state of Illinois. Along with this farmland are some of the most abundant areas of coal in the United States. Together farmers and miners work in their respective areas, always mindful of the geographic beauty and historical significance of the area. Where farmers and miners of the past were not so careful these areas now boast a plethora of wildlife.

Many of the early settlers got off their flatboats or traveled over from Kentucky, to Hardin County, Illinois. The stories of river pirates, thieves, and historical figures are numerous and fascinating. The first notable settlement in Illinois was Shawneetown in Gallatin County. Some great stories emerge from there as well. The Garden of the Gods, Cave Hills, High Knob, salt licks, Iron Furnace, Charlie Birger, the 1937 Flood, and on and on goes the list of people and places of District #533.

All those involved with Southeastern Illinois Community College: trustees, administrators, faculty, and students alike appreciate this unique part of the great State of Illinois and work towards its reparation, restoration, and preservation while all the while encouraging others to visit and enjoy the area as much as those who live here. It is part of the mission of the college -- one which is taken very seriously.