Academic Advisor/NJCAA Specialist/Head Baseball Coach/A.D.
Athletics/Student Affairs
Email: jeremy.irlbeck@sic.edu
Phone / Extension: 2425 (Counseling) 2424 (Athletics)
Location: E120 (Counseling), C 208 (Athletics)
Coach Irlbeck has taken the Falcons to the playoffs for the first time in 20 years and has them competing in the very tough GRAC Conference. There have been many improvements to the baseball facility since Coach Irlbeck has taken over. Those include: replacing the infield and resodding, rebuilt game mound, added irrigation, added turf halo around home plate, regrading and improving infield dirt with added soil amendments. Coach Irlbeck has Falcon field looking and playing great.

Jeremy came to Southeastern Illinois from Dodge City, Kan., where he was the associate head baseball coach at Dodge City Community College for the past four years.

Irlbeck was born in Hinkley, MN. He played 13 years of amateur baseball in Minnesota and Wisconsin. His coaching career began as a volunteer at University of Wisconsin- Superior. He later became an assistant baseball coach for Iona College in New Rochelle, NY and for Central Methodist University in Fayette, MO, before accepting a head coaching position at Minnesota West Community and Technical College in Worthington, MN.

In playing and coaching, Jeremy has experience in NJCAA (Divisions I, II and III), NCAA (Divisions I and III), and NAIA. At DCCC, his team won back-to-back region VI championships and had 30 wins in a season for the third time in the school’s 75-year history. Irlbeck also served as academic advisor and recruiter during his time at DCCC, a position he also holds at Southeastern.

Irlbeck earned his bachelor’s degree in physical education with a coaching minor from the University of Wisconsin-Superior and his master’s in secondary education from Central Methodist University in Fayette, Mo.

Coach Irlbeck is married to Karissa and they live in Harrisburg with their sons Wiley and Jordan. 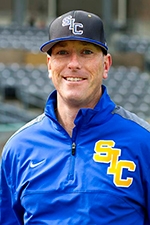